How to use the eShel with the new collimator

Since june 2018, a new collimator module is available for the eShel spectroscope

In this section , we describe the changes to be made during observations and data reduction process with the AudeLA software to get the most of this new collimator. We assume that you have already replaced the former collimator by the new one. If needed, find the explanations here.

On the whole, the way to use the eShel spectroscope is quite the same : AudeLA manages pictures acquisition and then data reduction. The only changes to be made to your observation protocol address three specific points :

In this new setup, only the « Tungten type » pictures must be used, and no longer the « LED » ones. For example, in the reference pictures sequences, one must only use « tungstenSerie » pictures : 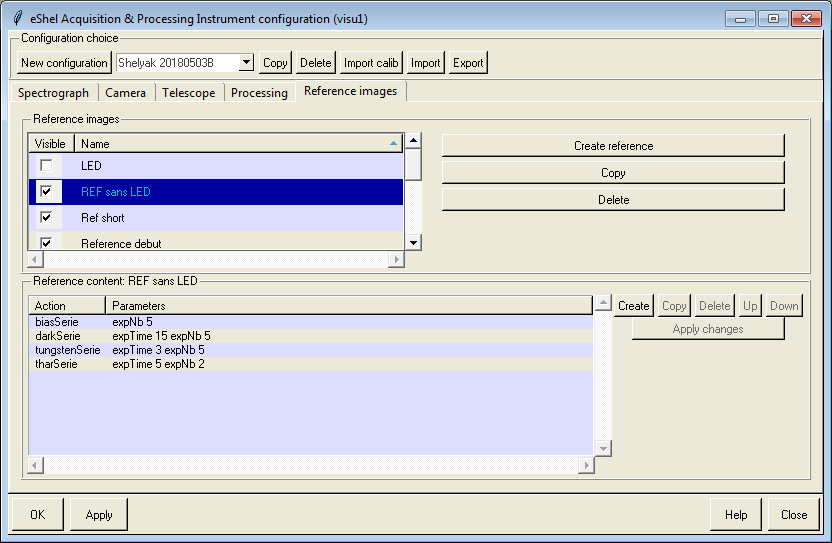 The data reduction process remains the same. The lack of LEDS pictures doesn’t interfere with the process.

The adjustment of the data reduction parameters to extend the calculation to the orders 30 to 55 is done in the Processing tab of the eShel’s control panel :

Of course, the replacement of the collimator doublet has necessarily changed the spectrum position in the picture. Therefore you have to adjust the parameters « middle order Y coordinate » and « reference line X abscisse » by using a Thorium picture.

With all these changes done, your eShel spectroscope is fully operational for observations with an increased reach in the blue part of the spectrum.