I have been practicing astronomy since 2008. Having not studied, it was through leisure and reading that I knew this fabulous field. When I started the observations, I remembered the summer nights spent looking at the sky with my grandfather, the Big Bear, Cassiopeia and the thousands of stars, we can already understand the infinity of the domain… From my interest for astronomy I joined the Royan astronomy club “Les Céphéides” at this time we observed in the dome with a friend who described objects to us with passion and as he had a C8 which could practically observe everything from planetary to deep sky, I took myself this telescope. Quickly I realized that the eye was really limited to observe. And since my grandfather was passionate about photography, I bought a dslr camera and the “short exposures” started.

When I started in astronomy, with the family we often went to Oléron and I remember seeing a CNRS panel at the Dolus roundabout… It was while thinking into why there was this CNRS panel that I found the CNRS spectro doctoral school and the Shelyak company. At this time there was only the Lhires III on the Shelyak website, I was not sure what it could do, but I already knew that I liked it! In 2015 I acquired an Alpy 600 and a Lhires III and the magic started! I started spectroscopy with a C8, it’s a very good school because the tube is light! Getting to know and use your equipment well, managing autoguiding well so as not to lose flux, properly adjusting your spectrograph to have the best resolution and clean guide camera are very important steps. Recently I invested in a C11 to have more flux and increase in magnitude. Larger diameter also come with more greater difficulties if we does not know his instrumentation well (everything is amplified). But properly set this will go up to magnitudes 17 with the Alpy and 11/12 with the Lhires III. The quality of the sky must follow too!

A big thank you to the members of the spectro community who popularize and help newcomers to participate in ProAm campaign, it makes the community exciting!

The twin Quasar QSO 0957+561, is an exotic object located in the Big Bear constellation. It is a quasar distant of 7.8 billion light years and this is a gravitational lens !!

Gravitational lens that can be observed with eye (!) Because the distance between the two light points is 6 arc seconds  (6 ’’), it’s very small,  it’s 1/300 the size of the Moon. To make it more meaningful, let’s take the lunar crater Tycho: which is 86 km long, it’s about 8 times smaller than this crater… Compared to the planets: Saturn has an apparent size of 20.1 arc seconds, this twin Quasar is 3 times smaller, it is roughly the apparent size of Uranus (4.1 arc seconds)… it is therefore very thin, but visible !

To see it visually in the eyepiece, you would especially need a large diameter telescope; 2 or 5 meters would be a good option but difficult to have this kind of telescope… because the magnitude of this double quasar is… low: 16.7 and 17. So really not very bright! 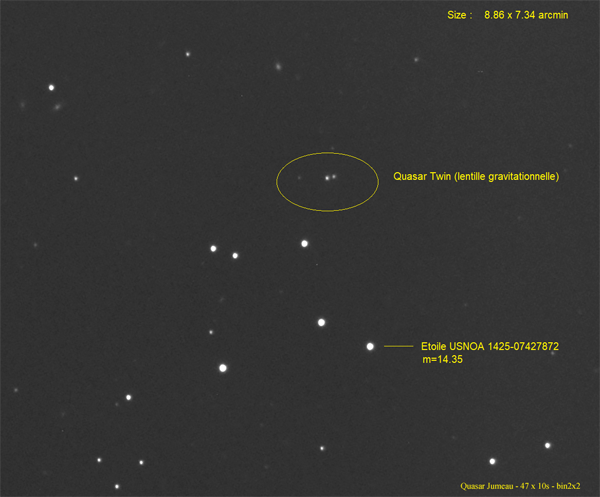 Taking a photo in a C11 with a CCD camera makes it easier to see. The twin quasar is the double dot in the yellow circle. The 2 points are the Quasar gravitational lens. Impressive! Total exposure of  47 x 10s in binning 2×2.

How is this gravitational lens produced?

About 4 billion light years from Earth and directly on the Quasar line of sight is the huge galaxy YGKOW G1. This giant “elliptical” galaxy has such a large mass that it can deflect light from objects behind it. This phenomenon not only allows us to see objects that would otherwise be too far apart, but also to see them at two points.

The first detection of a gravitational lens meant much more than the discovery of an impressive optical illusion allowing telescopes like Hubble to see effectively behind an intermediate galaxy. It was above all “proof” of Einstein’s theory of “general relativity”.

This theory had identified gravitational lenses as one of its only observable effects, but until the observation of this “Twin Quasar”, no lens of this type had been observed since the idea had been raised for the first time in 1936 !! It is therefore an exceptional object, quite mythical !!

Funny details, the arrival time of the light coming from this quasar is different depending on whether it takes the path that produces image A or B !!! For the Twin Quasar, there is 417 ± 3 days of difference between the two images.

What observation can we make with amateur setup?

On such a huge object? Hmm! The challenge is to make a study which confirms the astrophysical characteristics of this object. In other words, being a gravitational lens, we can see the object in 2 points. You’d have to get enough light to analyze and study it in spectroscopy. If it’s indeed the same object, we should be able to take 2 spectra which would have the same line characteristics as well as the same shift (redshift) because the object is 7.8 billion light-years away… (according to Wikipedia). This would confirm the “astrophysical” similarity of these sources, confusing it into one. To see the result that we expect on quasar spectra, we mainly see emission lines related to the accretion disc. The emission lines are Hydrogen: Lyman and Balmer, Nitrogen, Carbon and Oxygen. Elements ionized several times. As we observe only in the visible domain for the moment from 3800Å to 7500Å and because this quasar has a redshift of 1.416, the typical lines which will be shifted towards the red and should appear in the visible are the lines [CIII] at 1909Å and Mg II at 2799Å. They will be shifted to 4612Å and 6762Å. This is the magic of redshift, catching UV rays in the visible domain.

The optical set up:

To make this observation which is not sure to be conclusive given the difficulty …, 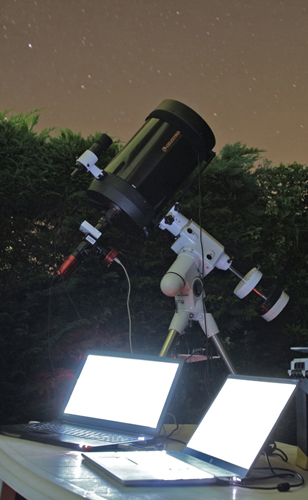 at least a C11 optical tube (28 cm in diameter) will be used, as well as an ATIK414 CCD fitted with a high quantum efficiency sensor to acquire the weak signal emitted by these objects. The spectrograph used is an ALPY 600 with all the modules (autoguiding and calibration module). The autoguiding module is equip with a 23µm slit. Several exposures of 30 minutes each will be required to acquire the signal and reduce noise.

Decrypt the signal: What are we going to see?

The spectrum acquired is an accumulation of 6 exposures of 30 minutes each, or 6 x 1800s, 3 hours of total exposure. The image is monochrome, that is to say in black and white, the blue side is on the left and the red side is on the right. You have to imagine a rainbow in the photo below because the spectroscope scatter the light.

The vertical lines of different intensities are emission lines due to light pollution passed through the spectrograph slit! This is the typical signature of the Sodium street lights. This undesirable signal will be subtracted when processing the spectra. Ah light pollution !!! Pyrenees mountain, sacred mountains with a much purer sky! (It is important to note the importance of creating sky protected areas  to give free rein to the nature harmony and animals life.

Note in the image below 2 horizontal lines, these are the 2 spectra of the famous quasar or rather of the gravity lens.

An engineer and meticulous adjustment made it possible to put these two objects in the spectrograph slit at the same time. Mission one therefore successful, the two objects were well put in the spectrograph slit which is a little more than 3 pixels wide in the guiding camera! A great chalenge to put this weak object in the slit and maintain it for 3 hours of exposures to the pixel near to limit the loss of signal and that the signal does not mix!

Here are the two spectra treated with ISIS software by Christian BUIL. 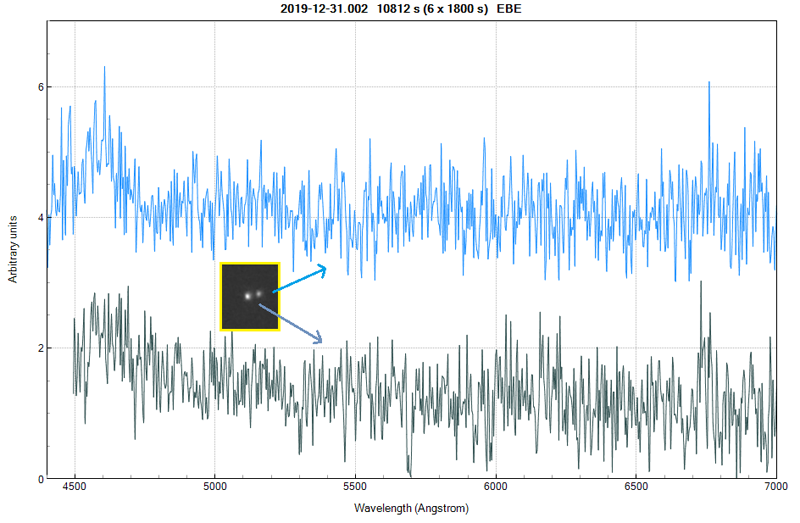 The two horizontal lines are the raw spectra of the quasar and converted into a 1D spectrum (the wavelengths on the abscissa, the intensity on the ordinate). The weakest quasar image is the blue curve  (top) and the brightest the gray-green (bottom) (magnitudes 17 and 16.7).

First the signal is very very weak, at the same noise level, but very present!

Second, at first glance we see a beautiful bump after 4500Å, around 4600Å on the two spectra, it is the [CIII] line which is visible in the expected place. Interesting! So it’s positive! the [CIII] line appears well on both spectra. The observation and processing of the data is conclusive. We can also see the Mg II line in the second spectrum, the lower one which is the brightest at magnitude 16.7. It just stands out a little more than the noise. In the second spectrum this line is not very visible lost in the background noise. We see that there is something but not very convincing. A 2×2 binning would have been very useful in this case, but to avoid mixing the signal from the two sources which are very close, a 1×1 binning was preferred. We can calculate the redshift with the [CIII] line which arrives around ~ 4600Å we find a redshift of

The spectrum filtered to better identify the various lines

Conclusion of this observation :

The observation is successful! Far from being easy and very delicate, because the object is very low magnitude ~ 17, at the limit of the setup used and the place of observation is not really suitable for this type of observation: located in the city and at a low altitude (10 meters above see level).

Time to prepare the material for the experimentation, I waited 1 hour in the morning to start acquiring the images so that all the street lamps  were turned off. Thanks to  the town hall of Vaux sur Mer to have undertaken this measure of economy and ecology.

This manipulation suggests the possibilities and the power offered by amateur spectroscopy … Observing objects that are at the edge of the “observable” Universe is not nothing. Imagine the view you have from a plane in flight, the ground seems very small, tiny …. And yet it’s nearby! There, with this amateur setup  we can “observe” objects located billions of light years away … If astronomers of past centuries could see this. See the wonder of a Galilee or a Newton discovering this setup and these results … We are dwarfs on giants shoulders.

To finish I would say that: