UVEX, to write a new page in astronomy 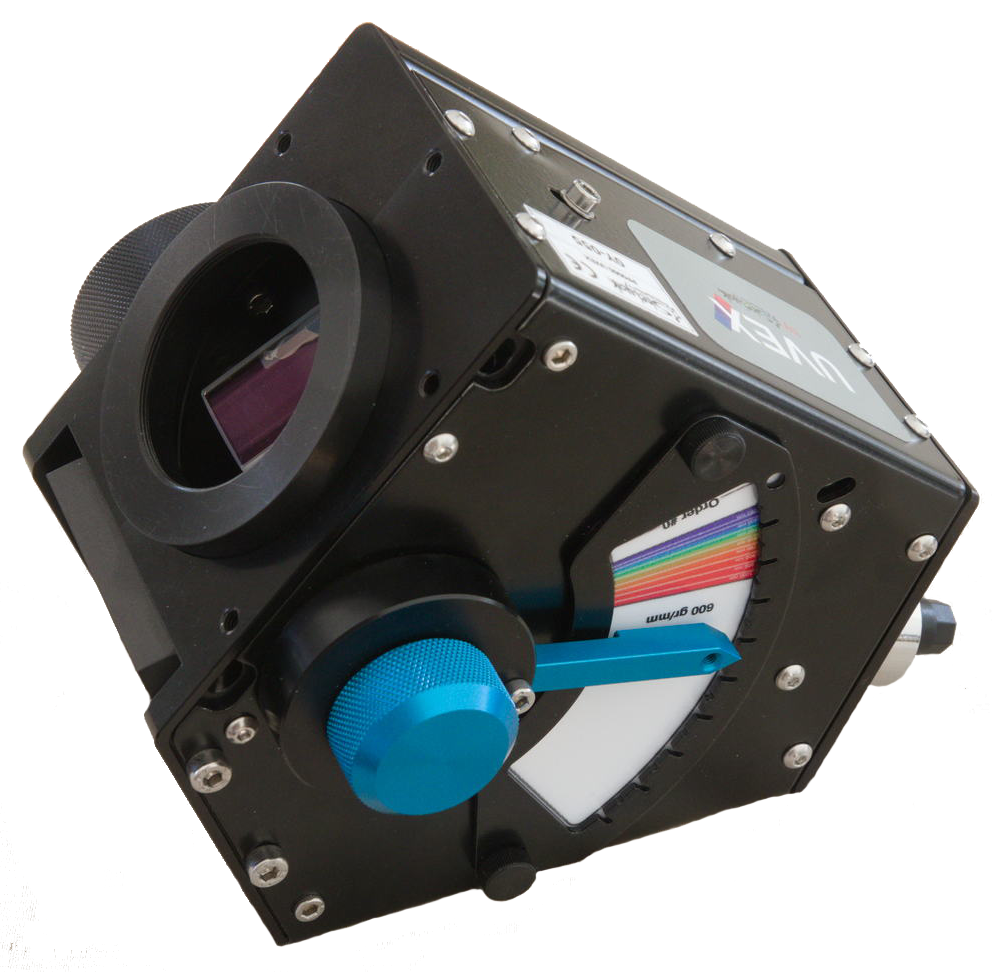 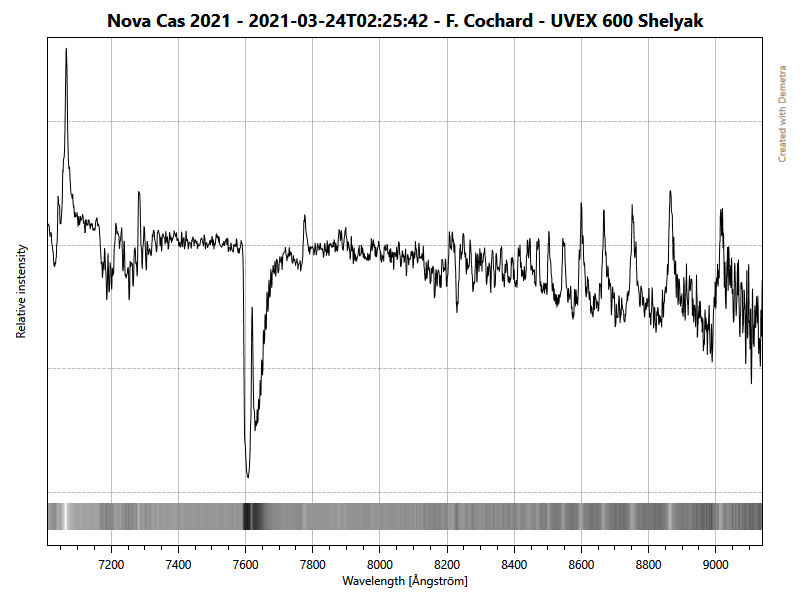 We are happy to announce the arrival of a new instrument in the Shelyak range. This event is important for several reasons.

It’s a sign of the dynamism of the astronomical community, which always pushes the limits of its observations further. We designed it to meet the expectations and suggestions of astronomers – there is passion in this instrument!

Originally, UVEX was designed by Christian Buil, with a team of amateur astronomers in the south of France – for 3D printing (see the project ). The variation that Shelyak offers today is a high quality industrial version; the two approaches are very complementary.

UVEX, it’s first and foremost an instrument that opens up new possibilities on the scientific level. Its achromatism makes it possible to observe in a wide range of wavelengths, going from Ultra-Violet (UV, from 350nm) to Infra-Red (IR, at 1000nm); the latest generation cameras (with CMOS sensors) make it possible to explore these new areas which go beyond the limits of the human eye. If you are familiar with astrophysical issues, you know that there is a lot of science to be done in UV (the field of high energies and violent events), as in IR (field of star and sky chemistry). interstellar medium).

It is a new generation of instrument on the technical level, to support the evolution of our discipline. This is mainly found on three points: 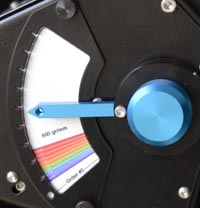 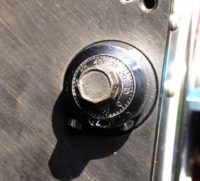 Who is this instrument intended for?

UVEX is clearly aimed at demanding observers, for whom performance and productivity are the goal.

Due to its compactness, it is intended for “small instruments” – say telescopes up to 300 or 400mm in diameter. It can very well be used opportunistically on larger telescopes (observations have been made with C2PU’s 1m telescope at Calern observatory in south of France) – but this will necessarily be at the expense of pure performance (e.g. a large telescope requires to use a larger slit, which reduces the resolution). 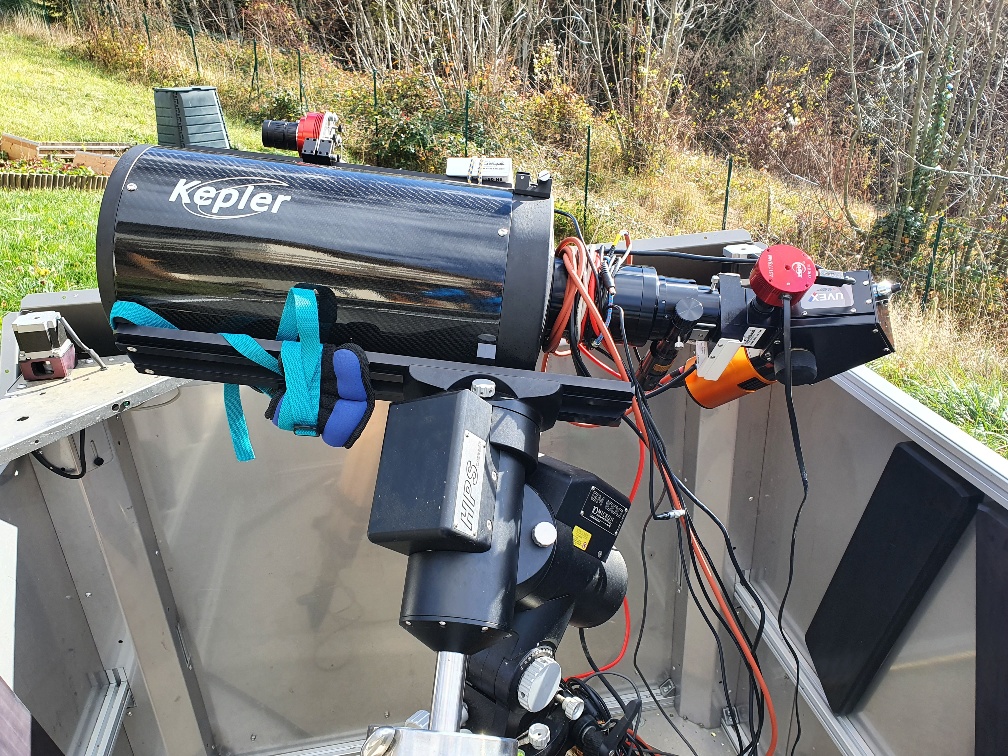 Its versatility allows a variety of scientific applications – with a preference for stars if your telescope is very open (the useful length of the slit is all the greater when the telescope is closed – avoid observations of large objects with a telescope at F / 5!).

The merits of UVEX in UV and IR are praised, because this is a specificity of this instrument, but obviously it’s also perfectly comfortable in the visible.

We are often asked the question of the relative positioning of the different instruments in the Shelyak range – which one should I choose for my purpose and my telescope? Here are some answers: 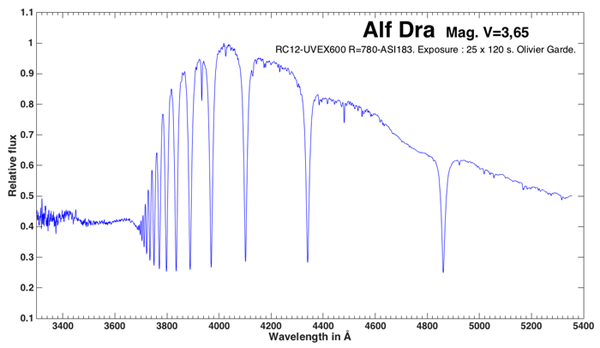 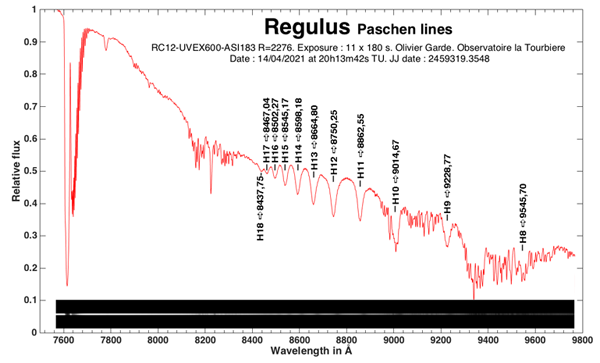 Example of 2 spectra produced with a 600 gr / mm grating: on the left in the near UV, on the right in the near IR. We can see through these 2 spectra all the possible extent of UVEX.

A little bit of technique

The highlights of the UVEX are versatility and achromatism.

The achromatism of UVEX comes from its “Czerny Turner” (CZ-T) architecture: it is a proven solution that only uses mirrors for the collimator and the lens. An achromatic instrument is an instrument whose focus does not depend on wavelength (or color – chroma). A mirror is inherently achromatic, while a lens (or any set of lenses, such as a photo lens) is necessarily tainted with chromatism.

We opted for UVEX with a “crossed” CZ-T architecture, ie the incoming and outgoing beams cross each other. This has little effect on the optical behavior, but it is what allows a particularly compact instrument, and an organization particularly suited to astronomy – because the camera is not overhanging at the end of the telescope, but is on the contrary closer to the tube. 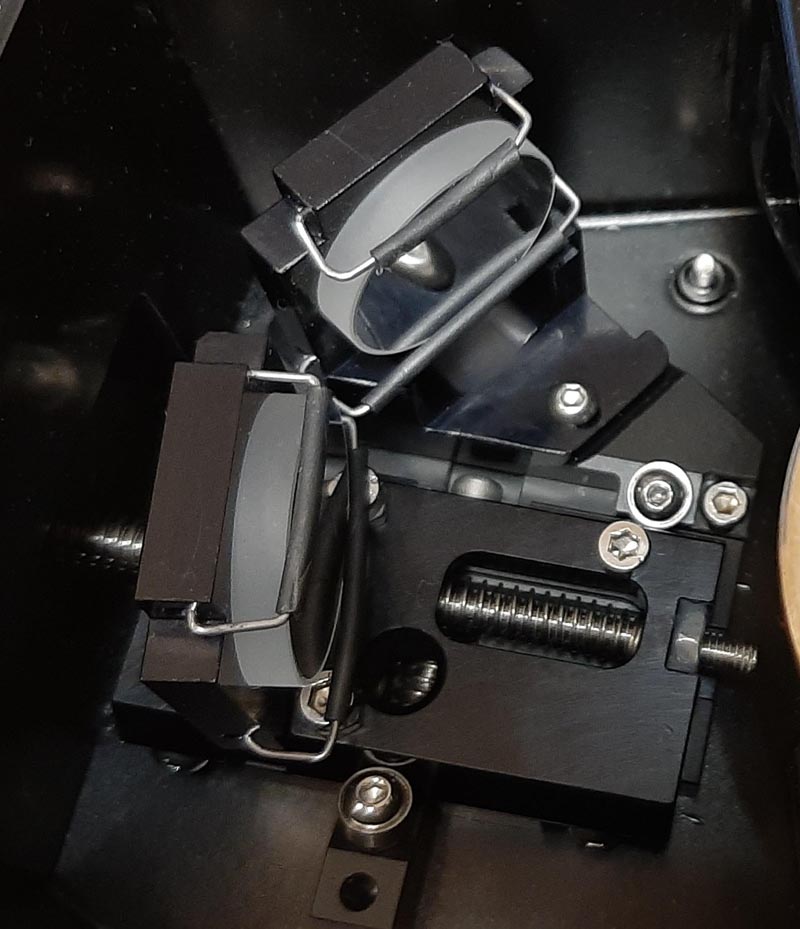 Interior view of the instrument

The UVEX spectrograph is achromatic … so it is behind a telescope itself achromatic that it will give its full capacity. In the current landscape, there are mainly three achromatic telescope architectures: Newton, Ritchey-Chretien (RC) or Cassegrain (pure Cassegrain, not Schmidt-Cassegrain) telescopes. If you have the option, choose one of these three instruments – with a preference for RCs, open at F / 8.

Indeed, the question of the aperture is important in spectroscopy. UVEX is designed for a maximum aperture of F / 5 – which is the case with most Newtonian telescopes. With a telescope open at F / 5, you will not lose any photons by vignetting. But since a CZ-T instrument uses mirrors, this requires working “off-axis” (the outgoing beam cannot be on the same axis as the incoming beam). And that induces a sensitive astigmatism, as soon as one moves away from the optical axis. The consequence is that the instrument is excellent on the optical axis (that is to say if you place your star in the middle of the slit), but the quality deteriorates at the edge of the slit, and that more that the telescope is open.

On a practical level, these considerations translate as follows:

The possibility of using a wide range of telescopes and apertures and the first illustration of the versatility of the UVEX. But that’s not all !

Diagram of resolutions as a function of network and wavelength

The UVEX does not include a autoguiding module or a calibration module, because these modules already exist in the Shelyak range: these are the Alpy autoguiding and calibration modules. It’s quite possible to use UVEX without these modules for experiments on table, in fields far from spectroscopy. It is by thinking of such applications that we made the slot easily removable: it is possible to adapt an input device easily, or even an optical fiber (a connector is available as an option).

For use in astronomy – on a telescope – we strongly recommend the use of the Alpy autoguiding module, to see the star you are observing well. We also recommend the Alpy calibration module, but this is less “necessary” than the autoguiding module: with this module, the spectral calibration is done in a few clicks thanks to Demetra, but there are also other means of ‘calibrate your spectra – this is mainly a question of ease of implementation.

To end this presentation, I would like to draw your attention to two technical points:

Demetra software to support you

Demetra software has been designed to support you during all your observations, from spectra acquisition to data reduction. Over time, this software has become a benchmark. The goal is clear: simply to obtain spectra of the highest possible scientific quality.

The arrival of UVEX is accompanied by a version dedicated to this instrument; each spectroscope obviously has its specificities. If the general concepts remain the same as for an Alpy or a LISA, you will see new features in the data reduction process: a “CMOS correction” step has been added, and the wavelength calibration step has been added. been enriched (to take into account the rotation of the grating).

In our mind, UVEX is inextricably linked with Demetra for effective daily use. But you obviously remain completely free to use your own tools: neither UVEX nor Demetra locks you into a specific format.

We had a lot of fun designing the UVEX. Today we present to you an instrument of which we are proud, and we are convinced that it will accompany you on your own adventures. So we “pass on the torch” to you to make new observations.

We count on you to tell us when you do wonderful things with this instrument: it’s your turn! 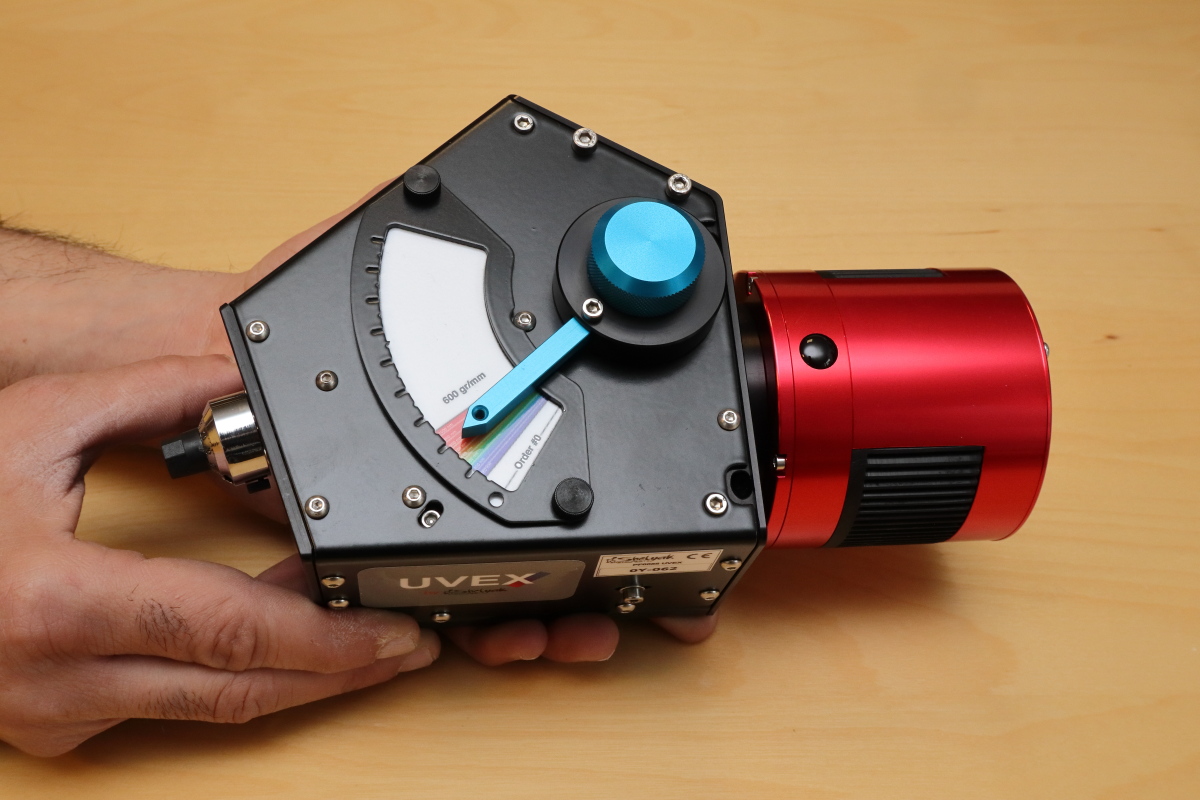 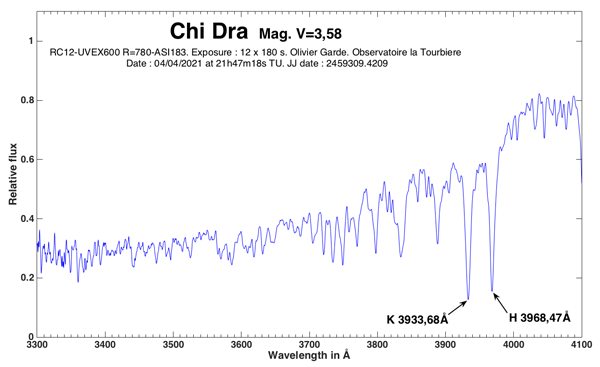