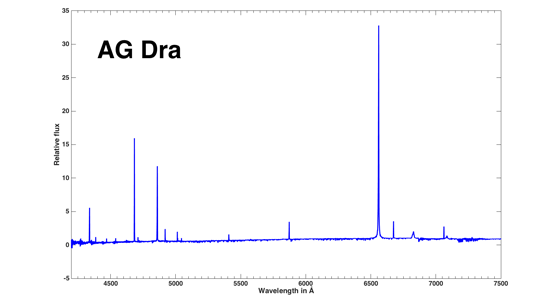 AG Draconis is one of the most fascinating stars to observe, particularly through spectroscopy. This binary system consists of a red giant star and a white dwarf star. Every ten to fifteen years, it undergoes a major outburst of luminosity. The direct cause of these outbursts are thermonuclear explosions on the surface of the white dwarf that is accreting hydrogen from its binary companion until a critical mass and temperature are reached where the thermonuclear reactions can start.

During these outbursts, the matter surrounding the binary system is strongly ionised by the white dwarf radiations. As a result, strong emission lines are visible in spectra that can be used to infer the surface temperature of the white dwarf, a pivotal factor in understanding the mechanisms at work in this type of binary system.

An article on the last outburst of the symbiotic star AG Draconis  (magnitude V ± 9.7) was published in the magazine Proceedings of Science by 3 astrophysicists who used amateur spectral data from the ARAS base.

For Shelyak Instruments management, this publication, after many others, validates the philosophy used from the start as a guideline for the company’s developpment : offering high-performance although affordable products that allow amateurs astronomers and professional astrophysicists to work hand-in-hand in the understanding of our universe.

Interesting fact : situated in the circumpolar constellation of Draco, AG Draconis is permanently observable in the Northern hemisphere.

Ladies and Gentlemen, start your spectros !