Pascal Le Dû is an amateur astronomer who observes the sky from Brittany point in France. It analyzes and lists the candidate planetary nebulae spotted by amateurs. He maintains the basis of French discoveries and maintains the PlanetaryNebulae.net website with Thomas Petit, dedicated to PN candidates. He does not fail to share his passion through lectures and articles in astronomy magazines. He is the 2016 winner of the Dorothea Klumpke – Isaac Roberts Prize from the Astronomical Society of France.

At first glance, it is curiosity that motivates any amateur who observes the sky. Sometimes this curiosity is rewarded by acquiring a very beautiful picture or by explaining a physical phenomenon that takes place thousands of light years from Earth, through spectroscopic observation.

The story that follows precisely traces the path that made it possible to determine the exceptional nature of an object in the sky thanks to its spectroscopic analysis. The adventure begins in August 2013 when American amateur astronomer Dana Patchick discovers an object that could be a planetary nebula (NP) using WISE images in the mid-infrared. 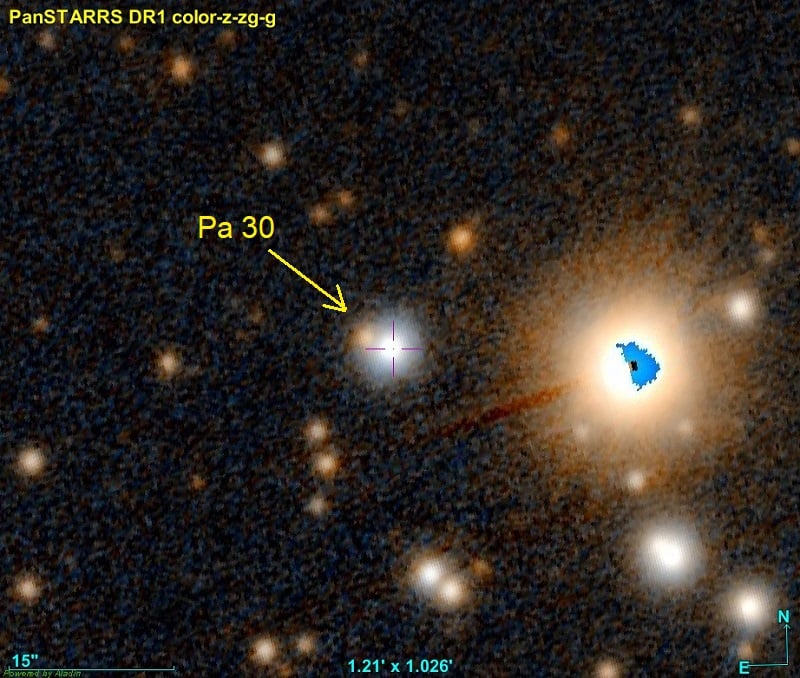 Dana is a member of the Deep Sky Hunter (DSH), a group of hobbyists who research objects that may be planetary nebulae, based on professional surveys available on the internet. The object in question is called “Pa 30”. It was observed in September of the same year in [OIII] narrow band imagery using the 2.1 m diameter telescope of the KPNO observatory [1]. Its spectrum was also observed in October 2014 with the 3.5 m diameter WIYN telescope from the same American observatory. [2]. A very weak envelope [OIII] is detected, but nothing particular appears on the spectrum of “Pa 30”. The object is closed.

Two years later, in July 2016, “Pa 30” was observed again as part of a professional spectroscopic confirmation program of planetary nebulae candidate. This program is sponsored by Professor Quentin Parker’s team, an astrophysicist at the Hong Kong University. The telescope used is the GranTeCan (GTC) [3] of the Canary Islands, a telescope 10.5 m in diameter. For various reasons, this data is not used.

The same year, in October, during a program of the same type, but carried out by amateurs, “Pa 30” was again observed by spectroscopy at AstroQueyras [4]. Nothing particular appears on this target which is quickly dismissed. The team is made up of Olivier Garde, Thierry Lemoult and Pascal Le Dû. The telescope is 0.5 m in diameter and the spectroscope used is a Lisa from the Shelyak instruments company [5].

On a beautiful Brittany night, Pascal Le Dû decides to return to this target in October 2018. The object discovered by Dana is nevertheless quite convincing… Pascal has a 0.2 m Newton-type telescope and an Alpy 600 spectrosgraph. The spectrograph slit is centered on “Pa 30”. 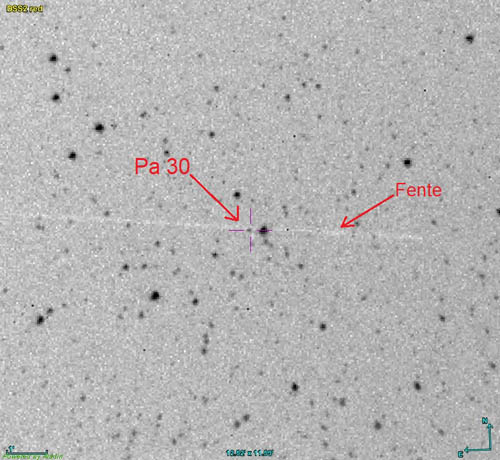 After 10 minutes exposure, the first raw spectrum appears on the screen and… it’s a great moment of emotion! The spectrum of “Pa 30” located near the spectrum of a very bright star, is quite unusual. It presents a very intense “large emission” in the near ultraviolet (UV) …

The exposures follow one another. A first process effectively shows on the reduced 2D spectrum, a very intense emission line which starts at ~ 4000Å and continues in the near UV. 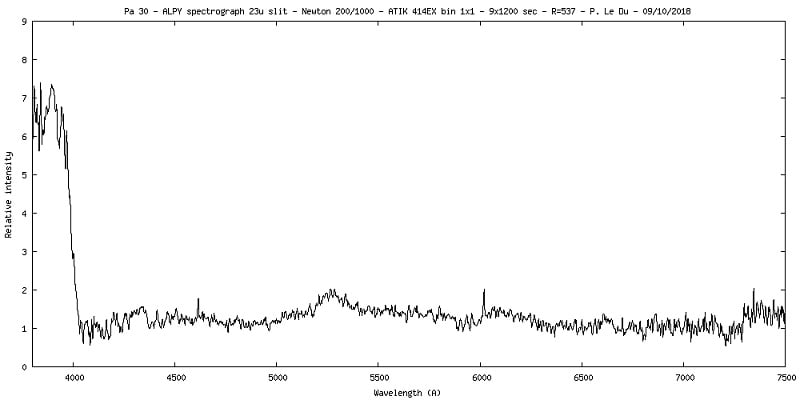 It’s absolutely necessary to confirm this observation between amateurs before contacting a professional. Christian Buil, who is perfecting his new UVEX [6] spectrograph optimized for near UV, as well as Olivier Garde, do not benefit from good weather conditions in their regions. Thomas Petit, who lives in Prague and has the same setup as Pascal, tries the object for the first night, without success. The second night is good, the signal is confirmed! It’s time to send a message to Quentin Parker.

His reaction is immediate. The signal observed is really atypical. A team is formed within the Space Research Laboratory of the Hong Kong  University (LSR HKU) [7]. All data on “Pa 30” is collected. The 2016 GTC spectrum is analyzed and it is perfectly superimposed on the “Pa 30” spectrum observed from Brittany, with better resolution of course. This signal in the near UV has not been detected before because the spectrosgraph used in 2014 (WIYN) and in 2016 (AstroQueyras), are not efficient in the near UV, unlike the ALPY600 which goes “further in the blue ”. By finely analyzing the data from the GTC and in particular the very weak lines [SII], Quentin Parker’s team discovers that the central star of “Pa 30” is surrounded by a nebula which has an extremely fast expansion speed, close to 1100 km / s. The naming of the object is then dissociated. The central star, which is one of the hottest Wolf-Rayet stars in the Galaxy, is called the “Parker’star”. 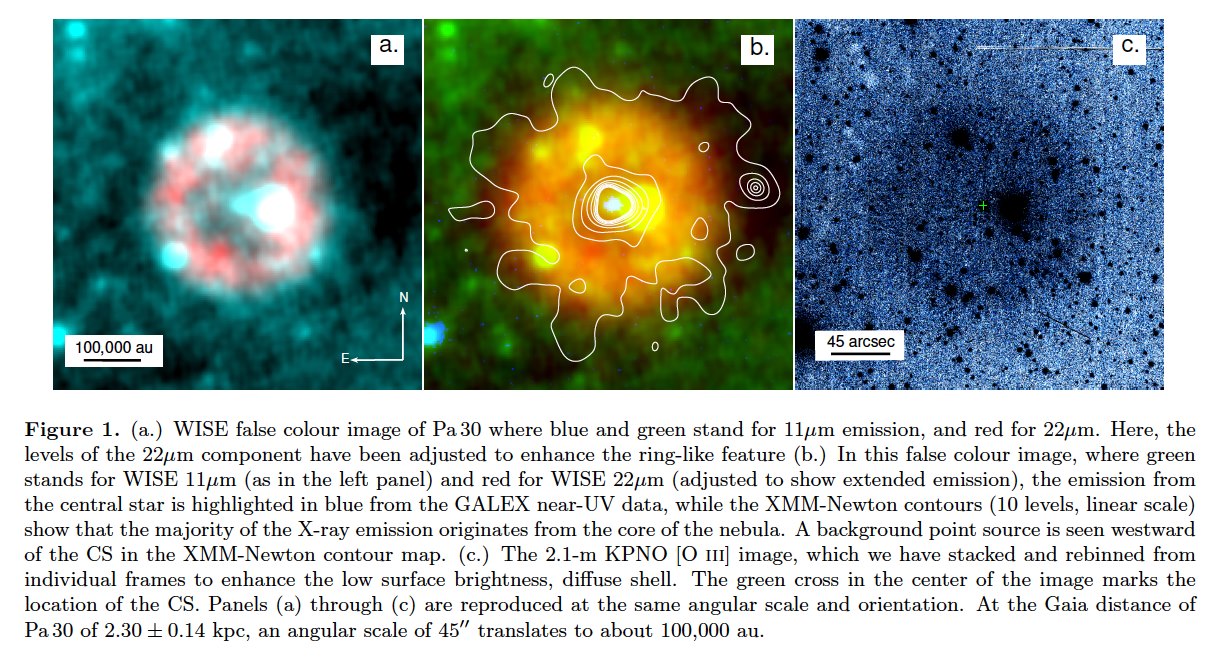 Fig. 6 : Pa 30 image at different wavelengths from the publication 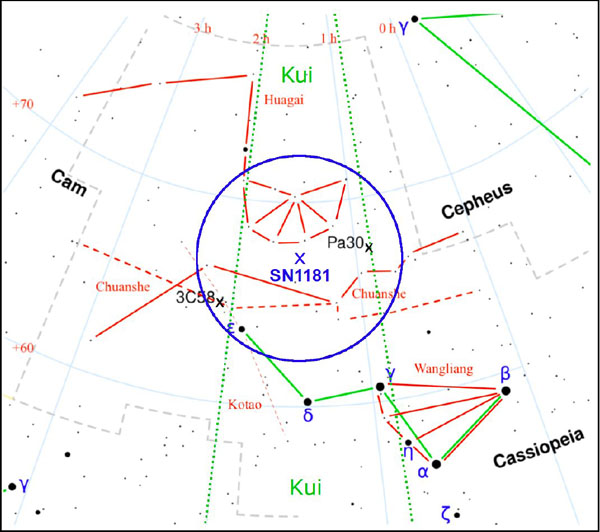 The expansion velocity of “Pa 30” corresponds to an event that would have happened at that time. Parker’s star would be the “remnant” of the fusion of two white dwarfs, which would have produced a very rare phenomenon, an Iax-type supernova. 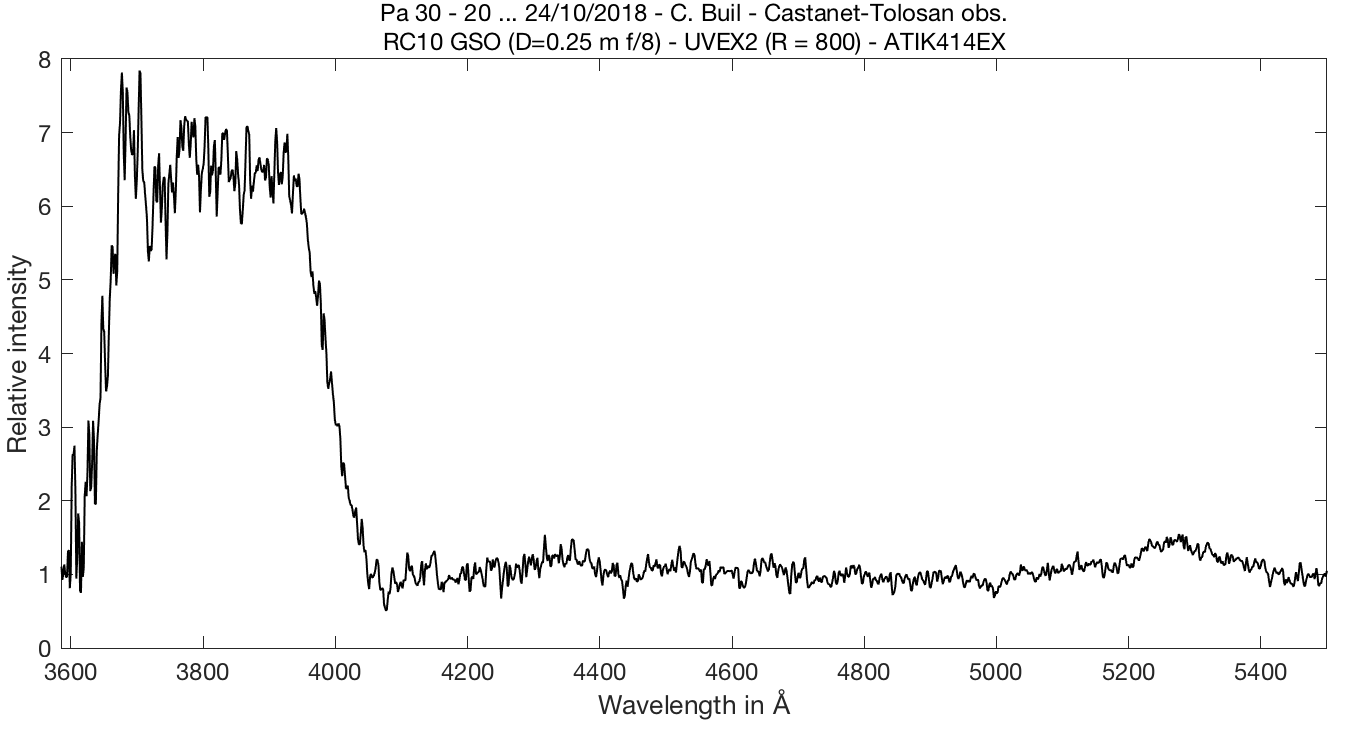 Note that Christian Buil nevertheless managed to observe Pa 30 using his UVEX 2, shortly after discovering the exceptional spectral nature of this object. Its spectrum of October 24, 2018 confirms the full potential of this new spectrograph, as shown in figure 8. The line detected in the near UV with the ALPY600 is fully revealed with the UVEX which goes further in the blue at 3600 Å . This spectrograph is now available in its version 4 in 3D printing which is much more advanced and a commercial version by Shelyak instruments is also available . Its near UV performance will certainly encourage scientists to exploit the full capabilities of this remarkable spectroscope.

The epilogue of this story is a publication in the “Astrophysical Journal letters [8] which has been widely disseminated in the world scientific press and in the media. It all started with an amateur observation in France, at the far Brittany point, carried out with a small ALPY 600 spectrograph and a 200 mm diameter Newton telescope. This publication is the result of a great cooperation between professionals and amateurs.