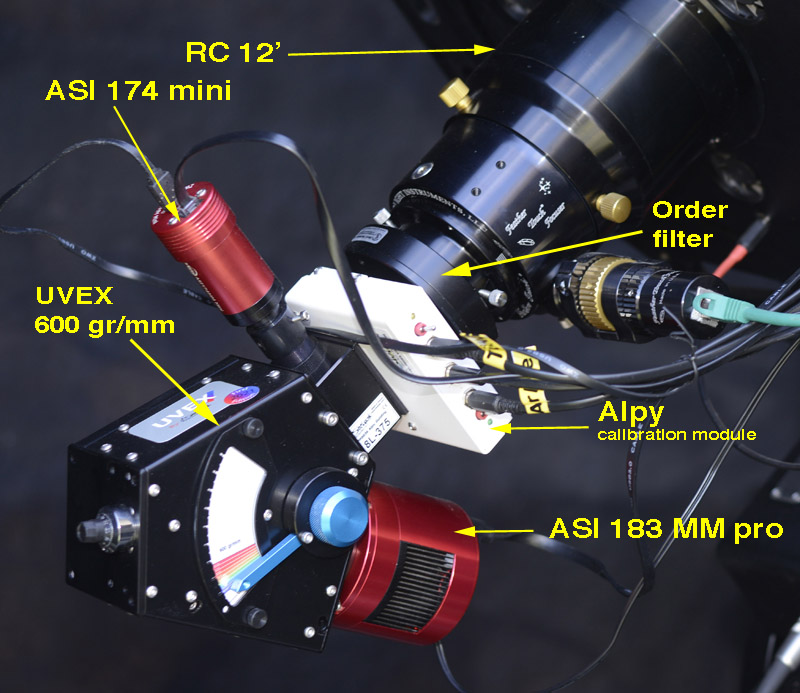 Here’s the setup that I used to make the spectra of this article (except for the quasar spectrum described later). UVEX is equipped with the Alpy 600 autoguiding module with a ZWO ASI 174 mini camera used in 1×1 binning, with 5.86µm pixel size. The spectral camera is an ASI 183 MM pro used in binning 1×1, with pixel of 2.4µm. The ALPY 600 calibration module is also installed in the optical chain.

For the near IR part, it’s necessary to install an order filter to cut the 2nd order that we start to see from 720-750nm. You can use the order filter which is installed inside the UVEX. In my configuration, I used a 2-inch filter holder with drawer and I inserted an order filter which cuts the wavelengths > 530nm and therefore which allows to obtain a spectrum without order 2 up to 1060nm. You can also use a filter that cuts higher like a 570nm or a 610nm. The filter should only be inserted if you want to make a spectrum in the near IR, let say from 760nm.

The telescope is a Ritchey-Chretien of 305mm in diameter and open at  f / 8, only made of mirrors and the whole setup is mounted on a German 10 micron 2000 HPS equatorial mount. The setup is controlled remotely.

I started with near UV spectra. To properly set the grating angle on the target wavelength range, we can use the H & K lines of Calcium II in the Sun spectrum during the daylight.

First, we turn the index on the Vernier at the wavelength of 350-400nm, then we take short exposures on sunlight (without pointing the Sun of course) continuously and seeking to position the H and K lines in such a way as to have the K line at 983 pixels on the X axis, which allows to have the extreme blue part of the spectrum between x = 0 and x = 883. H is 3968 Å and K is 3933 Å.

Here’s the Solar spectrum in this near UV where I have indicated the wavelengths of some remarkable lines of the Sun. We can go quite far in the near UV, but the limiting factors are:

Now that the UVEX is set for this wavelength range, we will be able to take targets spectra at night on remarkable stars. 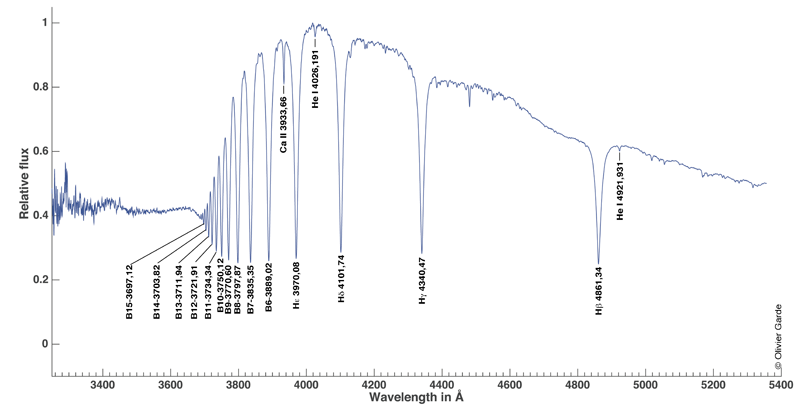 The graph shows the spectrum of HD 123299 with 25 exposures of 120s each,  a total exposure of 50 minutes. The exposure time may seem important for a star of magnitude V = 3.65 but if you want to have flux in the extreme blue part where the quantum efficiency of the ASI 183 is low, It’s therefore necessary to increase the total exposure time. 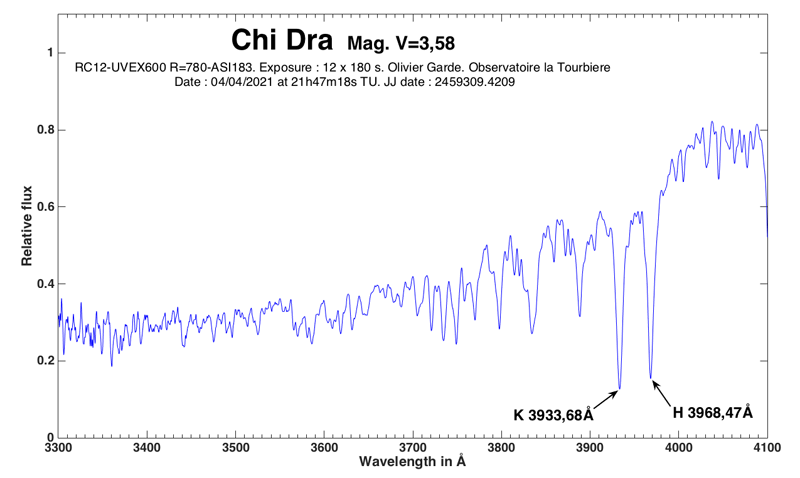 Another test on a target of magnitude V = 3.58: Chi Dra, spectral type F7V with H and K lines. 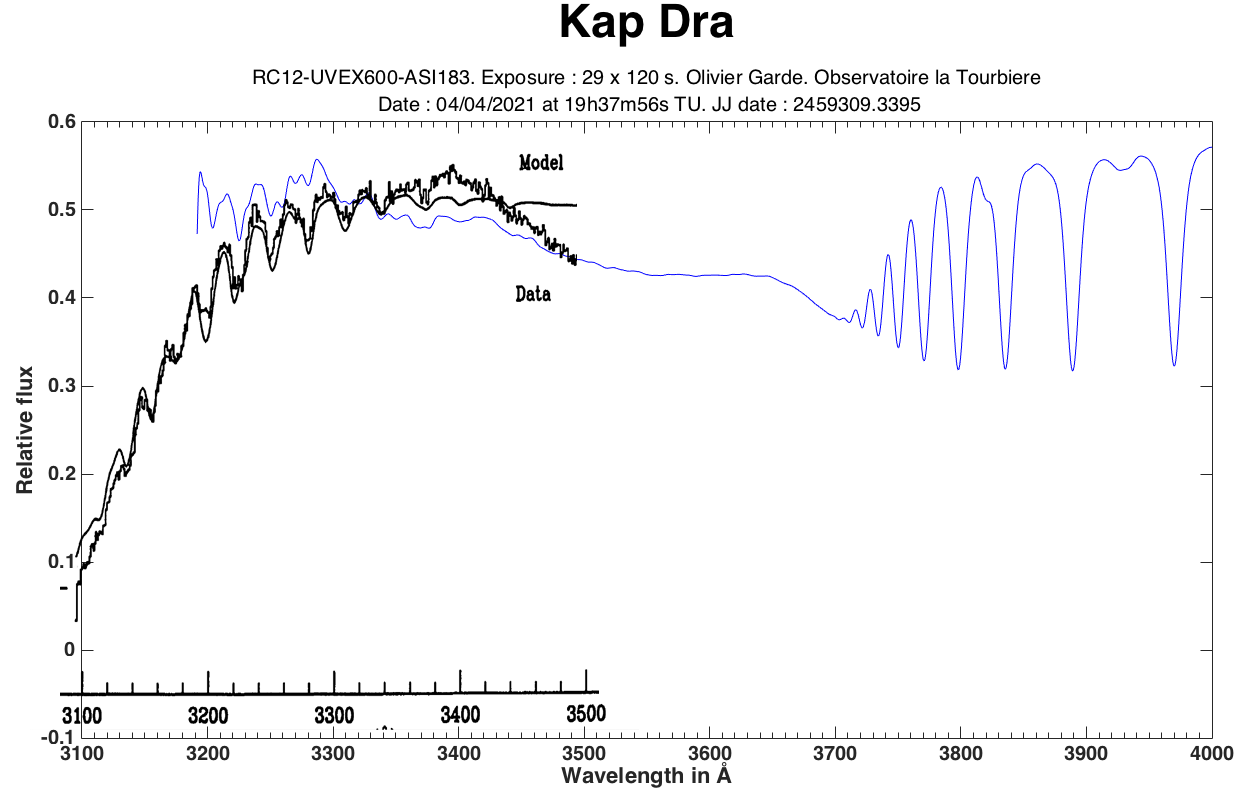 On Kap Dra (magnitude V = 3.89) we see the Balmer jump but also the first atmospheric lines of Huggins bands (Ozone O3). In blue, the spectrum obtained with UVEX, in black, the model of these bands recovered in this publication.

This time we move the  600 gr / mm grating angle towards the near IR side. The Vernier index is placed at the 800-900nm position.

Here again we will be able to make the adjustment during the day with the help of sunlight. I have calibrated the spectrum here by placing the atmospheric lines present from 7600 Å on the left edge of the camera. It’s a good visual way to recognize this series of lines. The spectral range observable with an IMX 183 sensor like that of the ASI 183 MM pro is 2200 Å, so by setting the atmospherics bands to 7600 Å, we can obtain a spectrum up to 9800 Å. But we could have gone much further in the near IR up to around 10,500 Å. (further in the near IR, the ASI 183 camera becomes a little blind).

Once calibrated in wavelength, here’s the solar spectrum with these typical lines of Calcium II near IR side. During the night, I pointed to Regulus from mag. V = 1.4, a hot star of spectral type B8IV. The setting is identical to that made in daylight on the sunlight.

We can easily see the hydrogen lines of the Paschen series in the near IR (as for the visible with the Balmer lines). 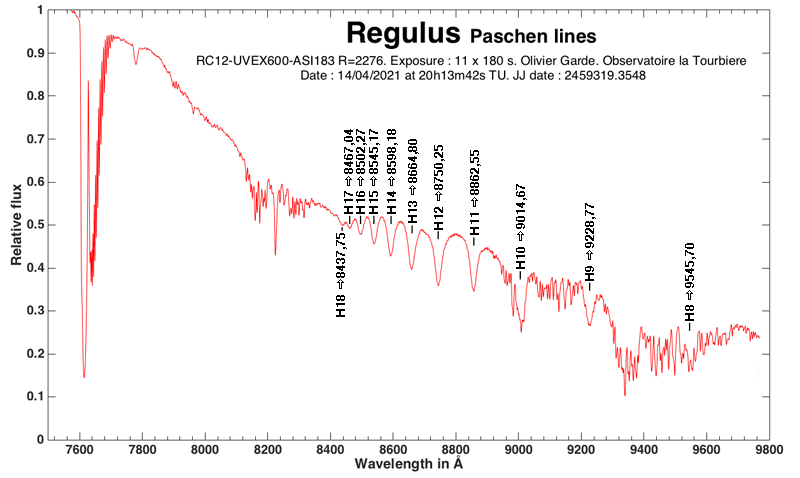 A quadruple quasar with UVEX

Still with the same 600 gr/mm grating, we tried with Christian Buil, Pascal Le Dû and Pierre Dubreuil, a spectrum of the quadruple quasar J014709 + 463037 of magnitude V = 15.4 for the brightest component. This quasar is better known under the name of: ” Andromeda’s Parachute”. 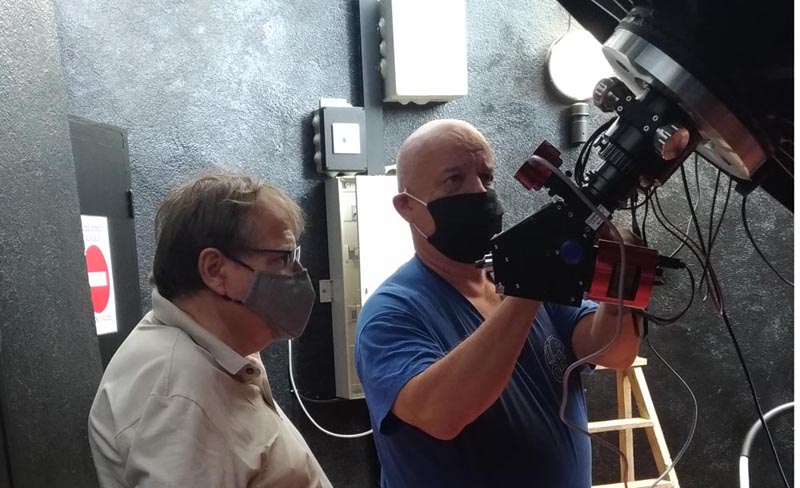 UVEX installation on the one meter telescope with Christian and Olivier (Photo : Pierre Dubreuil)

This time we used an unusual telescope for the UVEX: a Cassegrain telescope of one meter in diameter from the C2PU in Calern on the heights of the French Riviera. The UVEX is not specially dedicated for “big” telescopes but rather for diameters of 200 to 400mm. But we will see that UVEX still works on this type of telescope. 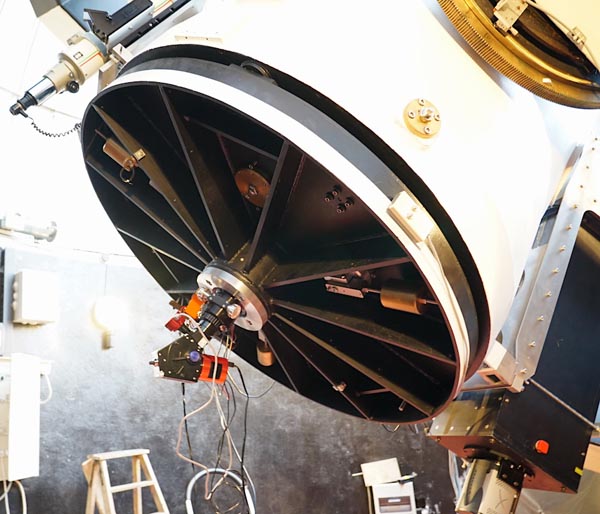 UVEX on the T1m at Calern observatory (Photo : Christian Buil) 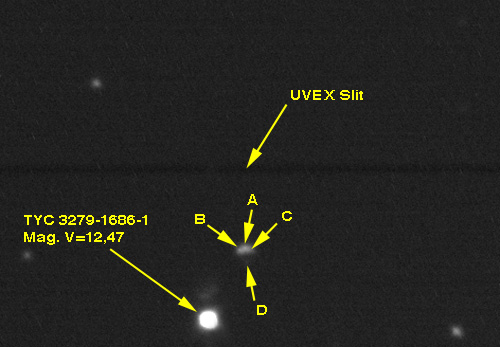 Autoguiding field of the quasar

This quasar is a quadruple gravitational lens with a redshift z = 2.377. Element D is the weakest, it’s not this element that we have placed in the slit but group A, B, C which is much brighter. 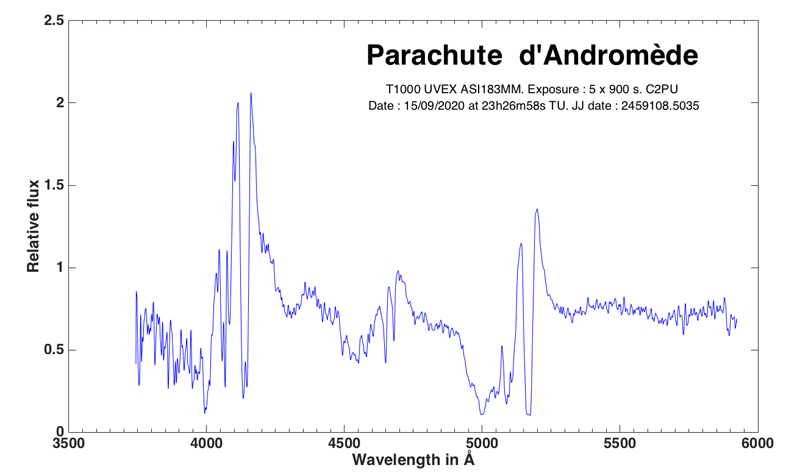 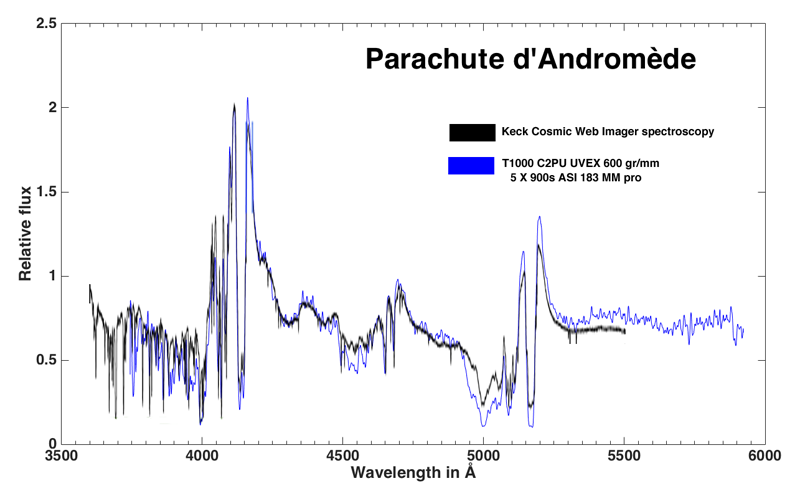 And the comparison with a spectrum resulting from a publication and which was carried out with the Keck Cosmic Web Imager, a full field spectrograph installed in Hawaii on the Mona Kea.

We can see that UVEX behaves very well in wavelengths other than the visible domain by approaching the near UV and near IR thanks to its optical design based on mirrors (not lenses). Although dedicated to telescopes with diameters between 200 and 400mm (Ritchey-Chretien at f / 8), it can also be used on larger telescopes to explore faint objects. The examples shown here were all carried out with a  600 gr/mm grating (delivered as standard with the spectrograph) but there are 4 other gratings of 150, 300, 1200 and 1800 gr/mm allowing to obtain other spectral resolutions.